Last Thursday, the overnight Shanghai Interbank Offered Rate (Shibor) leapt by 2.31 percentage points to 8.29%. Proximate cause of the eruption: China Everbright Bank Co. Ltd. defaulted on a Rmb. 6 billion ($979 million) debt to the Industrial Bank (not to be confused with the much bigger Industrial & Commercial Bank of China Ltd.). In turn, Industrial defaulted on its obligations, triggering still more defaults, driving needy borrowers to the interbank market and sending Shibor through the roof. "In human-person language," recounts Anne Stevenson-Yang, managing principal of J Capital Research, Beijing, "that means that banks believed that lending money to each other overnight was riskier than lending to some dodgy property developer in Gansu for six months. That is really scary."

Herewith an update on China (sinking), Australia (sympathetically sinking) and a handful of Grant's short-sale names (also sinking, except for the one that soared). Our longstanding China backstory has lately moved front and center. China's banking and credit structures are evidently under pressure again.

"Sitting in Manhattan," observes colleague Evan Lorenz, "it's unclear just how deep the rot in China's financial system goes. Then, again, it's not clear that proximity improves the analysis; you can get a fair picture by surfing the Web. Thus, the People's Bank acknowledges that, at the end of 2012, bad loans jumped by Rmb. 23.4 billion to 1.07 trillion, the first reported increase in eight years. It may or may not assuage concern that on account of a binge in credit formation, non-performers as a percent of total loans actually fell by 0.22% to 1.56%."

It's not as if the Party isn't trying to do better. In March, the China Banking Regulatory Commission tightened rules on wealth-management "products," i.e., pools of short-term deposits that fund long-term, often shaky loans to property developers and other business borrowers. In May, the government cracked down on the over-invoicing of exports, a gambit by which hot money, averting exchange controls, lies its way into China. But as candor has improved, the trade balance has dis-improved. Year-over-year export growth slowed to 1% in May from 14.7% in April. "Whatever the leadership's calculus, the channel tightened, and cash started to dry up in May," Stevenson-Yang reports. "Yesterday, I was in Shenzhen where one money broker's comment was, 'A new channel will open up. But, before that happens, this is painful.'" 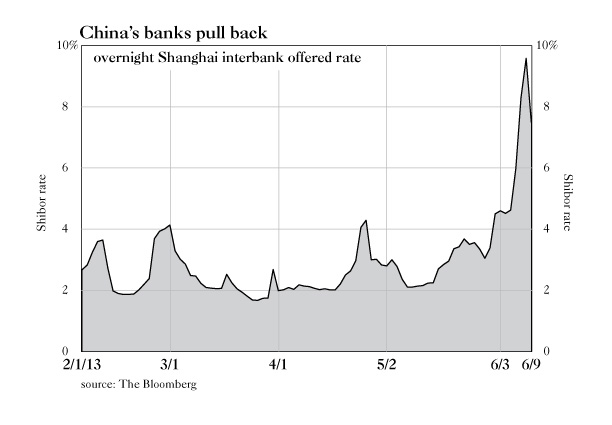 In response to these misadventures, provincial authorities are readying new bailout facilities, including the "asset management companies" that housed the underwriting errors of the 1990s (Grant's, Nov. 4, 2011). Last Friday, Xinhua News Agency, the Party's official press agency, reported that the People's Bank of China is in talks to roll out a deposit insurance scheme.

Everyone must pull his or her oar. State-controlled companies, operating under threat that three consecutive years of losses will cost them their stock-exchange listings, are taking such countermeasures as selling assets at inflated prices to friendly buyers. Would it help if the State-owned Assets Supervision and Administration Commission ordered its charges to produce 10% growth in net income in 2013? It positively would not help, but SASAC has nonetheless so commanded.

As prophesied in these pages, China's troubles haven't stayed in China. In the first quarter, Australian GDP grew by 2.5% year-over-year, the lowest reading in two years. Unemployment in resource-laden Western Australia jumped to 5.2% in April from 3.5% last May. Bringing up the rear among the component companies in Bank of America's High Yields Metals and Mining Index last month were Australian miners, notably Fortescue Metals Group Ltd.

"New analysis from corporate accounting firm Ernst & Young shows that a sample of 354 listed base metal and coal companies with market capitalization of $500 million or less have, on average, just under two years left of spending at the current rates. Some risk collapse, the firm says." So reported the Australian Financial Review on June 6.

"[A] bear on China must confront the implications of his bearishness," said Grant's in mid-2011. "The cessation of Chinese growth would turn down the economic and financial lights in places as geographically far removed from the People's Republic as the United States, Brazil, New Zealand and . . . Australia." The currencies of commodity-exporting nations were likewise at risk, we contended. Not that lower exchange rates would be universally unwelcome. Consider, observed Lorenz, how a cheaper Aussie dollar would smile on the fortunes of Treasury Wine Estates, TWE on the Sydney bourse (Grant's, June 3, 2011). Subsequently, shares of TWE have appreciated by 69% as the Australian /U.S. dollar exchange rate has depreciated by 12%. "What is no longer true about Treasury Wine," Lorenz adds, "is that, at 37.1 times trailing earnings, it's cheap.

"We've had bearish things to say about a number of other companies doing business in, or financially infected by, the People's Republic," Lorenz goes on, "including Zoomlion Heavy Industry Science and Technology Co. Ltd., Chinese maker of construction equipment (1157 on the Hong Kong Exchange; Grant's, Oct. 21, 2011). In the first quarter, Zoomlion reported top- and bottom-line declines of 31.7% and 82.4%, respectively (Grant's, April 19), amid persistent shadowy rumors that management is cooking the books. At 5.3 times trailing earnings, the stock looks cheap, but looks can be deceiving--and, in this case, given rapidly deteriorating credit exposure to struggling customers, they almost certainly are.

"The companies directly tied to Australian mining have fared even worse," Lorenz continues. "Shares in Monadelphous Group Ltd. (MND on the Australian Stock Exchange, Grant's, Jan. 13, 2012), the mining-oriented engineering outfit, down 27% since we published, trades at 9.4 times earnings. Cheap on its face, the multiple may prove to be a very rich one if, as we expect, the earnings so capitalized won't be matched for a very long time to come. Readers may not remember our short discussion of Fleetwood Corp. Ltd. (FWD on the Australian Stock Exchange, Grant's, July 13, 2012). We and they may wish we had given the topic a little more attention. Fleetwood, like its American namesake, makes recreational vehicles and manufactured housing. It rode the mining boom by putting roofs over heads in remote Australian places. Owing to project cancellations, FWD's stock has dropped by 72%."

We remain bearish on Westpac Banking Corp., (WBC on the Australian Stock Exchange), and Bank of Queensland Ltd. (BOQ), both featured in the issue of Grant's dated March 22. The stocks have declined by 8% and 12%, respectively. Westpac, we wrote, was valued as if Australia and China were still on the upswing. At 13.6 times trailing earnings and trading at 191% of book, it's still so valued. Bank of Queensland, which hired a new broom in November 2011 to clean up the mess left by an earlier lending boom, may be repeating bad habits with its current expansion in formerly growing, now slowing, Western Australia. The shares are no bargain, we think, even at 12.8 times earnings and 92% of book value.

"Genesee & Wyoming Inc. (GWR on the New York Stock Exchange), the railroad company in our sights, is one of the most successful short-sale candidates you will ever read about," we said in the issue dated March 23, 2012. Would that we had omitted the words "short" and "sale." The knock on GWR was that it derived one-third of its revenues from Australia. But this one and only flaw management addressed by doubling the size of its North American operations. Now Australia chips in just 20% of revenue. At an estimated 19 times 2013 earnings, Genesee & Wyoming is a little rich but very well managed. We close out our journalistic short with a big fat loss.