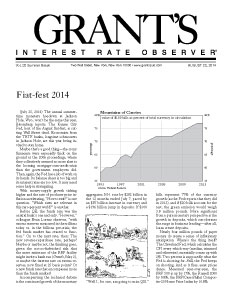 Nearly four million pounds of paper money do create a sense of inflationary anticipation. But where’s the thing itself?

A financialized age has at last produced a financialized pharmaceutical company. Herewith, a long look at an enterprise that does its compound-hunting not in the laboratory but in the stock market.

One last gasp for Treasurys?

As we read the new year consensus of investment sentiment, people love stocks, hate bonds and feel sorry for gold. Perhaps the trader's maxim applies: "If it's obvious, it's obviously wrong." If so, it may behoove us, aged and grizzled bond bears, to imagine a contrary scenario.

"The food is terrible," to quote the famously ambivalent restaurant review--"and the portions are so small." Much the same can be said of today's junk-bond market. The yields are terrible--and there's not enough new supply to satisfy the clamoring demand. On the art of selling what you don't even own.

The Environmental Protection Agency makes war on it, people of any shade of green despise it, and the advent of cheap natural gas threatens to marginalize it. Coal--and a certain attractive small-cap miner--are the topics under discussion.

The art of inflation

How many Old Masters for a seven-foot, $25 million Popeye? How many Esteban Murillos for a 21st century Oscar? Shedding bright new light on the cycles of taste and value in art and central banking alike.

No bull stock market is complete before the debut of the kind of equity that's valued on the quality of its narrative. "The road is better than the inn," wrote the immortal Cervantes centuries before the Twitter IPO. Herewith, a review of the new crop of story stocks.

Our pick not to click is an outlier in many respects. Its growth is supersonic, its sponsorship is first class, its margins are otherworldly--and Amazon has so far failed to lay a glove on it. A skeptical analysis of a stock that only seems to want to go up.