The balance sheet that ate Switzerland


Like a celebrity in flight from the paparazzi, the Swiss Confederation demands protection from its pesky admirers. To beat back the unwanted appreciation of the Swissie, the Swiss National Bank is--once again--vowing to move heaven and earth. Now under way is a speculation. Prompted by a friend (that's you, Harlan Batrus), we venture that the SNB will sooner or later be forced to permit the franc to appreciate and thus to enrich the holders of low-priced, three-year call options on the Swiss/euro exchange rate. It's a long shot, to be sure--the options are cheap for a reason--but we judge that the prospective reward is worth the obvious risk.

Curiously, for all the damage that Swiss private banks have suffered at the hands of American regulators, and for all the Federal Reserve's throat clearing about the supposed imminent rise in dollar interest rates, the franc is still, for many, the monetary bolt-hole of choice. To the Swiss, whose exports generate 54% of Switzerland's GDP, it's a kind of popularity they can live without--indeed, they insist, must live without. 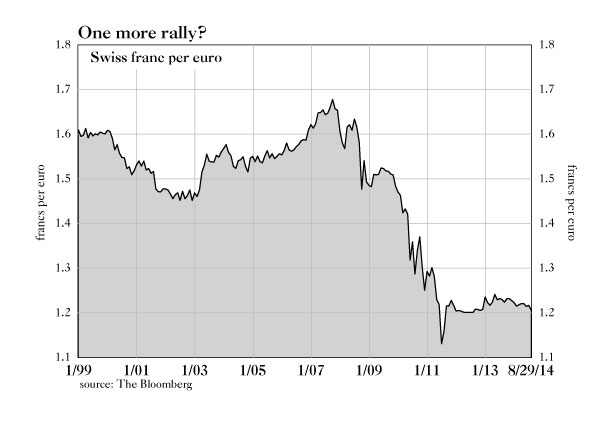 So the SNB prints francs. It drew a monetary line in the sand three years ago: The franc shall not rally through the 1.20-to-the-euro mark, the authorities commanded in September 2011. To enforce this dictum, they bought euros with newly created francs (the cost of production of the home currency being essentially zero). What to do with the rising euro mountain? Invest it, of course.

CFA fashion, the central bankers are diversifying across asset classes and currencies. Among these asset classes are equities, and among these currencies is the dollar. As of June 30, the Swiss managers held $27 billion in 2,533 different U.S. stocks, according to the bank's latest 13-F report (the gnomes file with the SEC just like ordinary big hitters, say George Soros or Goldman Sachs Asset Management).

Here's a metaphysical head scratcher. The Europeans conjure euros, which the Swiss buy with their newly materialized francs. The managers exchange the euros for dollars (also produced by taps on a keyboard) and with that scrip buy ownership interests in real businesses. The equities are genuine. The money, legally and practically speaking, is itself real--you never mind having a little more of it. But what is its substance? We mean, how is it different from air?

In any case, observes colleague Evan Lorenz, the scale of the Swiss operations is titanic. He reports that, from December 2007 to July 2014, the SNB's balance sheet expanded to the equivalent of 83% of Swiss GDP from 23% of Swiss GDP. For perspective, over approximately the same span of years--and after three successive QE programs that boosted the Federal Reserve's assets by $3.5 trillion--the Fed's balance sheet as a percent of U.S. output expanded to 25% from 6%.

Swiss interest rates have shriveled as the SNB's balance sheet has grown. Thus, in January 2008, the average rate on 10-year, fixed-rate mortgages was an already low 4.17%; as of June 2014, 10-year loans were offered at an average of 2.25%. "In other words," Lorenz points out, "Swiss homeowners can borrow more cheaply than Uncle Sam." They can and they do. From December 2007 to June of this year, Swiss mortgage debt as a share of GDP surged to 146% from 127%. (Between the first quarter of 2009 and the first quarter of 2014, chastened Americans reduced America's mortgage debt as a share of American GDP to 55% from 74%.)

In these stupendous interventions, the SNB is hardly unique. Nor is it alone as it attempts to undo, through administrative means, the distortions it creates through monetary policy. New "macro-prudential" directives have tightened standards for home-loan amortization schedules, minimum down payments, affordability, bank capital ratios, etc.

Though the UBS Swiss Real Estate Bubble Index continues to flash "risk," the mortgage market cooled a bit in the first half of the year, Philippe Béguelin, an editor at Finanz und Wirtschaft in Zurisch, advises Lorenz. Then, too, the foreign exchange market cooled late in 2013, which allowed the SNB to cease and desist from franc printing. Thus, the central bank's assets declined to CHF 492.6 billion in February from a peak of CHF 511.7 billion in March 2013.

Russia's accession of Crimea at the end of February reheated the forex market. ISIS and the Scottish referendum have continued to turn up the temperature. Business activity in China continues to dwindle (electricity production fell 2.2%, measured year-over-year, in August), and European growth registers barely above the zero line. On Sept. 4, Mario Draghi unveiled a plan for a kind of euro-zone QE. So growth in the SNB's balance sheet has resumed. In July, the latest month for which figures are available, footings reached CHF 517.3 billion in July, a new high.

"If the drumbeat of bad news continues, why wouldn't investors move more cash into Switzerland?" Lorenz inquires. "Successive rounds of easy money have made the opportunity cost of parking assets in Switzerland much lower today than at the outset of the SNB's currency ceiling. True, the Swiss 10-year yield has declined to 0.49% from 0.93% since Nov. 1, 2011. But yields on the Irish, Spanish and Greek 10 years have also plummeted--to 1.88%, 2.33% and 5.69%, respectively, from 14.08%, 7.62% and 37.1%, respectively, at their euro-panic peaks. It no longer avails the income seeker much to gamble on second- and third-tier sovereign credits. Swiss yields are at rock bottom, but so are the rest of them. On the combined, undoubted authority of Deutsche Bank, Business Insider and Bloomberg, Dutch yields stand at a 500-year low."

It's a funny old world when frightened people turn to the Swissie, which the SNB is again mass-producing, rather than to gold, which nobody can mass produce. While the franc yields something to gold's nothing, the spread is narrowing. And if as Thomas Moser, an alternate member of the SNB's policy-setting Governing Board, suggested in a Sept. 10 interview with The Wall Street Journal, the SNB finally has recourse to negative rates, the barbarous relic will outyield the franc. Way back in the 1970s, relates Christopher Fildes, a delegation of foreign newspapermen were visiting the old Union Bank of Switzerland in Zurich. In response to a casual remark about the proverbial strength of the franc, a Swiss banker scoffed. "We do not say 'as good as gold,'" declared this eminence. "Gold is not as good as the Swiss franc." And now?

A bet on a higher Swiss/euro exchange rate implies that the SNB will stop intervening. What monetary or political forces might converge to persuade the bank that a strong franc is the lesser of two or more evils? "John Bull can stand anything but he can't stand 2%," the saying goes. It's clear to listen to their anguished cries that broad segments of the life insurance industry can't stand one-half of 1%. The Tokyo Stock Exchange TOPIX Insurance Index is essentially unchanged since 1994, the year that Japan government bond yields began their inexorable slide. "We are the collateral victims of the monetary policy which has been designed to help governments and banks after the financial crisis," Denis Kessler, the CEO of Scor SE, the world's fifth-largest reinsurer, complained at a London conference on June 24. "We were not at the heart of the crisis nor did we create the crisis."

More money printing or sub-zero rates may once again set a fire under Swiss house prices, macro-prudential policies notwithstanding. It may ruin the life insurers. At some point, the Swiss National Bank would have to decide whether propping up the export sector is worth the cost. If these circumstances, a bet (and, to be clear, it is very much a bet) on the franc appreciating against the euro might pay. A three-year, at-the-money option on the franc appreciating against the euro is priced at 3.7% of notional today according to Bloomberg. To return to its high of 1.03 francs per euro on Aug. 10, 2011, the franc would appreciate by 17%.

While there is nothing especially exotic about this option, it is available only to institutional investors with an International Swaps and Derivatives Association agreement in place with a too-big-to-fail bank. For readers not so situated, there is always gold, which--in our opinion--the franc is no longer as good as.